Threat Intelligence is an advance tool use to track threats on your IT environment and in return provides meaningful and actionable intelligence. Which can be further improved using enrichment. 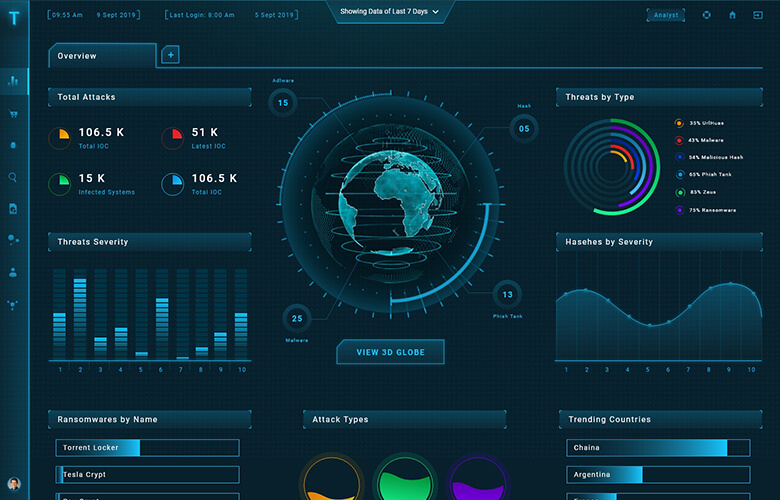 This was a version 2 release of an existing tool. The primary goal was to uplift the User Interface overall and improve the UX.

I started with understanding the security management tools and what’s the role of this tool and why they are used. In this phase, I had brief meetings with the developers and security experts to clear my doubts

Most of the research was already done by the security experts and tech team and the scope of the product was already planned. I was given a walk through the whole product and they explained to me the reasons for new decisions based on the feedback they had from the earlier version.

Once I understood the tool, the first thing I did was have a brief meeting with the developers to understand the technological possibilities we had and cleared my doubts for the same.

I went off my style and experimented with Sci-Fi UI which is inspired by movies like Iron Man. I was talking and showing my designs regularly to the developers to keep a check on the possibilities.

Existing UX was not really well optimized and changing it was a must for a better UX in future, but that would have hampered the existing users hence we decided on to have a small tutorial at the beginning of the UI, where we guide the users about the new features added and existing features moved around.

Existing data visualization was basic with limited types of metrics, Hence we added an option to customize the visualization and the metrics in them.

Creating a custom dashboard was challenging as all the metrics and visualization were customized by the users and if we showed up all the metrics upfront a user would have gone confused. Hence we broke down the whole process into steps and on conditional logic, Where a user will see particular metrics only he/she had picked a particular setting.

We created low fidelity wireframes first so that I and the security experts can get aligned quickly and move forward. We did the old school style paper and pencil and created wireframes for all modules.

We could have settled down on low fidelity wireframes as they were mutually discussed and created but imagining the complex interactions and clicking and seeing the data points would have helped the team to gain confidence on a different level. Hence I choose to create a high fidelity version as well.

Once the wireframe was out, the team was good to go ahead with UI.

The real challenge started for me to create UI designs that were opposite of my style, but by the end of the process I was really comfortable with the new style I adapted for this project and the client loves the new UI designs.

It was a fun challenge for me to explore up data visualization possibilities and look out for unique possibilities. The other challenge was to turn them up as per the theme.

As this was style was different then what I usually do, Instead of shying off I choose to push my limits off and explored new tools and created my first 3D UI element using AE and Red giant

There were high chances that the team would have added a few static new screens but as my contract was about to end, the best solution I could have thought was to share a style guide for easy development of future pages.

As more I started working on remote projects the more I had realized the power of collaborative designing and how it can actually help in the overall improvement of the product.

I learned about IT environment security which I was completely unaware of in the past.

Thank you for reading.