I loved how the Indian Railways had taken an initiative of creating an online app for booking unreserved train tickets and sharing train information, and the app is UTS. 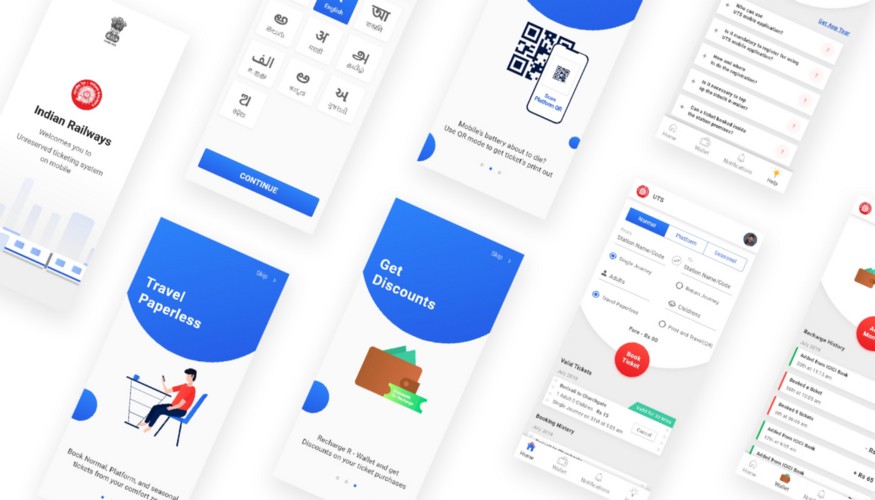 Talking about the app, the app is good but it’s not really user-friendly and I believe it needs to be highly user-friendly as it is used by the huge population of India, and they come from different backgrounds and age groups.

It is in use by 10 million+(according to play store downloads) users and if we see play store reviews it’s kind of above-average and people are happy with it, then what is making it a not so user-friendly app?

“People can become very efficient at using a bad design”

The above quote comes from Margaret Gould Stewart (VP of product design at Facebook) and this is what happening with UTS I believe, UTS is a sort of monopoly or you can say there is no real alternative for booking local tickets online, Hence it has a huge user base and people had settled down to a bad design.

Let’s dive deep into why I did this case study and what are the pain points users are going through.

Why I did the case study?

Case studies always help to grow and to test how we can solve challenges. Recently I have been using UTS app more often than usual and was having a poor experience, A normal user would have quit the app, would have left a 1-star review on play store/app store or maybe have complained about it to the Indian Railway team so they can improve it(very rare), but being a designer I chose to invest in my time to understand things deeply and share it out so maybe it reaches out to UTS team and they can take the best steps for users in future.

The goal of the app

The basic goal of the app is to book unreserved tickets for traveling.

WOW factors from the app

Option to print a ticket. 📷

This feature is a charm I feel, A user can use it when the phone’s battery is running low, or can use it to book a ticket for a friend or someone.

Now this might sounds a bit weird, like how it helps? It does help and beats a loophole, So now no one can take one ticket’s screenshot and share it with 10 friends so they all have a ticket(screenshot of the ticket), while all 10 paid only for 1 ticket. No screenshot feature beats this loophole.

Most of the people using this app wants to book a quick ticket, and adding card details, waiting for OTPs, is not the best way, Hence UTS introduced R-Wallet for quick transactions, which has other benefits as well like discounts and more.

Though it might look a normal Login/register page, things I really loved is having features, Like getting started, Helpline and FAQs upfront, from which a user can go through and understand things. Especially upfront helpline numbers, which would be handy in case of Emergencies, I had noticed bank’s Login pages and they don’t have helpline numbers upfront, so in case of emergency, you have to invest in your time in logging in to the app. But not in this case.

Once you had booked the ticket, even if your device is in offline mode you can open the app and see your booked tickets.

I decided to do a small user interview on the local ticket counters itself. In total, I conducted interviews of 7 people which includes people using the app and people not using it.

Reasons people not using this app

Here are the persona based on the people I interviewed.

Here are storyboards based on the persona I created.

Recently Mr. Akash’s daughter had installed UTS in his mobile for quick booking of local tickets, so Mr.Akash won’t need to go to the ticket counter and stand in a Q.

As Mr. Akash open the app, he realized he doesn’t remember what her daughter had set the password. So he chooses to try out a few common passwords before giving a call to her daughter.

After 3 attempts the UTS app gives a pop up stating that you had crossed ‘Max limit attempts and you are blocked for 1 hour’ Mr. Akash take on a sad walk towards the ticket counter to book a ticket traditionally.

Solution: ‘Giving a warning with every wrong attempt with the number of attempts left, This can help users like Mr. Akash to stop guessing the password and hit forgot password or checking in the password directory where they had stored their passwords.

As Mr. Prakash heads out for his office he bumps in with his neighbor in the elevator
Neighbor: leaving early for work today?
Prakash: Yes, have to actually renew my monthly travel pass and you know how long these Qs are at ticket counters
Neighbor: You can do it online using ‘UTS app’
Prakash: Really Great! Don’t have to leave early then. Thanks.

Prakash goes back to his home.
After chilling some time Prakash downloaded the UTS app and after spending some time he realized there is no option for language change, being an undergraduate and studied from a vernacular language and don’t know to read and write English, Prakash had no option but to walk out at ticket counter to book the ticket.

Solution: In India, not everyone can speak English, and India is one of the most diversified countries on the earth, on Indian currency(Banknotes) itself we have 17 languages, I believe adding few more languages will definitely add users on board for UTS.

👦 Young person — Scene → Mr. Krishna is going out for an interview

Mr. Krishna is in a rush as he got up late, So he chooses to book the ticket online while he was on the way to the station.
By the time he was about to set destination and other details, he was on the railway cross over the bridge as he was too close to the station. he was declined by the app to book a ticket, He walks down and got a bit away from the bridge to book a ticket and was able to get the ticket.

Though he got late for the interview because of all of the back and forth because of the APP.

Solution: I know if UTS allow booking a ticket on the bridge or on the station it will create a loophole for people not buying a ticket, and buying it once they spot a ticket collector, but during the on-boarding of the App, UTS can show the minimum and maximum distance a user can be in order to book a ticket.

Here is a heuristic review of the app by me

Right now the home screen of the app has a bunch of options to choose between, and every time you make a choice you have few other choices to make. It feels like a lot of walls in between you and your ticket.

While one of the primary goals of the app is to do a quick booking, Having so many options does not really help.

Solution: Bunch of options here are not so important at the moment, and even which is not used as frequently, or can be hidden away based on conditional logic and show when the condition is true

Steep learning graph, App is not designed like other apps, they have used a different approach here, which makes it difficult to understand and remember the process, and creates a poor recall value for the ticket booking process.

Users spend most of their time on other sites. This means that users prefer your site to work the same way as all the other sites they already know

Solution: They can have similar navigation and structures like other apps from the same domain.

Navigation is like a list of menu, which makes it difficult to reach on top options, especially with the new devices which have a ratio of 19.5:9

Solution: We can use bottom navigation which is used by a lot of other apps considering the same problem as well as it won’t hide any feature from the users.

No Onboarding in the app, once the user installed the app, they either need to go in User Guide to understand the app or need to figure out things and features by own. Onboarding plays a crucial role, it helps to educate users and build trust among the user and the app and helps in user retention.

21% of users will only use your app once

Solution: In order to create the best experience for the first time users of the app, onboarding is a crucial feature as it will educate them and will create a better user experience.

QR barcodes were placed on every station so the user can use it when the phone doesn’t have or have a poor GPS system.

Challenge with these QR codes is that, it does not show where it is placed in the station, so a user has to go on a search or inquire it to people or Railway team in order to find one, That’s how I found one, the story does not end here, it was on a height so people don’t damage it up, Me being above average height then normal Indian height was able to reach till there, but it will be challenging for others, Even after reaching the height was not able to scan it as the reflection was hitting it hard and making it difficult for the app to scan it.

Solution: Having a fixed spot at every station or disclosing the location of these boards in the app depending on the station selected would be really helpful.

While designing the new UI/UX my main focus was on how to make the booking process faster, make the app reach the masses, and educate the users to the true potentials of the app.

To make sure it reaches to the masses, adding an option to choose between multiple languages is crucial. As most of the people using this app in metro cities or people traveling in locals are people who had moved from their native place to cities in order to find employment and to make sure they can use this app without any trouble, an option to select language is a must-have feature.

In order to educate users about the features of the app, and onboarding would be highly helpful. Once the user had chosen the preferred language they will be educated about the key features of the app. This was challenging for me to decide on which features to show onboarding as there are a bunch of cool features in the app. Probably we can add or change a few depending on the feedback we get.

The challenge with the previous home screen was that it had too many options, and even after selecting ‘Book a ticket’ we have to go through 3 clicks before we can add our destination and other details.
In the new design, these options are upfront, and users need to just add details in order to book a ticket.

In source(from) and destination(to) The source would be auto-filled using GPS in travel paperless case, while a user can add source manually in print and travel case.

Instead of showing the ‘Cancel Ticket’ option all the time, we can make it conditional and show it only when a user had booked a ticket.

Assuming user behavior is the worst idea while designing. Doing research and testing a prototype might be a long way but it is the best way for creating a user-friendly product which the users will love to use.

What I can do better

Thank you for Reading